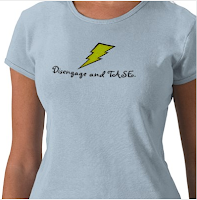 Bright, sunny morning, 52°F and clear. I drive in to the academy for the last day of instruction. I’ve already passed my practical examination, so all I must do is help my classmates pass theirs (by being a good practice subject) and take and pass the written test. Then at about 2PM there’s another opportunity to play with drunks.

The morning is spent with classmates; GI Jane is stressed because of a general test anxiety that mysteriously and routinely grips her, despite her being among the best-prepared people in the room. Glock is stressed because he actually failed the practical exam yesterday, but we all believe that the reason Glock is truly stressed is because he feels entirely and strongly that he was correct the first time and the instructors were wrong. We’ve seen this before, and it will be interesting to see if he can overcome his own stubbornness and actually do the test the way the instructors say it must be done. Since we have three of the state’s like 20 or so drug recognition experts and SFST instructors in one room, men with literally tens of thousands of DWI arrests and convictions, teaching us, my money is that Glock should probably take them at their word that they’re okay at this.

On Friday morning, too, instructor Axton pulled GI Jane out of the room while the rest of us were in class. Now, since the beginning, Jane’s scumbag radar has been pinging on overtime on Axton. Ten weeks previously, when Class A was doing SFST, Axton had seen Jane doing that little elbow-in-the-chin move that had first drawn my attention to her back in Week 1. He asked her if they’d done defensive tactics yet and she’d said no, and Axton had told her that he was a DT instructor and would love to talk to her about how men and women fight differently. Jane had replied that, of course men and women fight differently, that their strengths and body weight are different. To this, Axton had replied, “Well, I’d love to show you some moves sometime.” Which set off her radar.

Now he’s got her out of the room. Later she tells me that he was trying to give her a self-defense lesson. Ha ha ha ha ha ha ha. I mean, seriously. It went, she tells me, something like this:

“So, I’m drunk and belligerent and you’re trying to handcuff me,” he begins, “And when you go to handcuff me I knock you backwards and you fall to the ground. What will you do?” He staggered towards Jane, who kicked the shit out of him and kept her distance. She went to her knees, and when Axton fell forward towards her, she spun, put both her feet into his chest and pushed forward and kicked him, then reached down to her belt and simulated TASERing him.

Axton tried again. “I’m on my back, and you’ve tried to handcuff me – what do you do?”

“Disengage and TASE,” says Jane. “You’re on your back, there’s no safe way for me to do it, so if you won’t roll over, and you’ve already been combative with me, I’m gonna disengage and tase.”

Axton thinks about this – it’s not going the way he’d expected. “Think through it,” he said.

“No,” Jane replies, “that’s it. If you’re not listening, you’ve already been combative, you won’t roll over and put your hands behind your back? Disengage. And TASE.”

He doesn’t like this. He can’t show her how powerful he is. “What if I pushed you against a wall while choking you,” he tries.

“I’d put my right arm straight up, my left arm straight down, I’d rotate my body sideways, using my elbows to break your wrists, I’d elbo you in the throat, I’d disengage…and TASE.”

“Where did you learn this?”

“So you’ve just taken away every point I had to make.”

And Jane rejoined us. Axton looked for some other girl to pick on.

I’m really so proud of Jane in all respects. And “Disengage and TASE” is an outstanding phrase which, so far as I can tell, she made up on the spot. I had a T-shirt made, and sent it to her.

Earlier in the academy year, we’ve had something called the Kick Ass Study Guide passed round to us. It’s a Word document of about 50 pages and contains the answers to the most commonly missed questions of each test. It’s one of those, “un-allowed allowed” things, sort of a don’t-ask-don’t-tell policy, though some students in Class C got their nuts in the shredder when their lieutenant discovered they were using it. They (Class C) were specifically told that they may not use it. We in Class B were not told this – it’s sort of like how Class B is not allowed to use laptop computers and Class C (and Class D, which starts Monday) are still allowed to.

Anyway, Brad had a copy of the SFST page from the KASG and started quizzing us in preparation for the test. Thing is, for the written test, they’re fill-in-the-blank questions, and you can’t get them at all wrong; for example, calling it the “One-legged Stand test” as opposed to the “One Leg Stand” test results in a wrong answer. We’re all pretty rock solid. By late morning, each of us had passed the practical (even Glock), and we’d all taken, and passed, the written test.

They won’t tell us the grade we got, just that we passed, so that we can testify later that we passed the written and practical examinations and we do not know how many questions we got wrong (this staves off questions on the witness stand, in front of the jury, like, “You only got an 82% on your SFST Test? So which 18% of the SFST do you not understand?”)

Then we went to lunch. We’re flying high: there’s nothing stopping us now but the final examination on Monday. We’ve made it through.

After lunch they bring in a new group of drunks. Among them, I discover with a thrill, are Lt America’s parents. Both of them. They’re drunk as shit. But that’s not the best part.

The best part is that a) dad is a retired cop; b) dad is almost a textbook example of “little man”; and c) both mom and dad are clearly, patently, unmistakably horrible, venal, petty, jealous and obnoxious people. I suddenly had a flash of Lt America’s childhood and early adulthood, trying, and failing at every turn, to please these people; of praise being heaped upon the younger and thinner brother, who became a cop before Lt America. His life must be truly terrible. The father is a brute, a loud-mouthed, know-it-all, pudknocker.

I have sipped of Lt America’s despair and found it to be delightful.

We’ve finished the academic requirements of the Academy. All that’s left on Monday is the final examination, and the final physical test.

I will spend the weekend studying.