There is something wicked cool about building clearing. This is the stuff you most often see on TV, and is most often wrong. The biggest innovation for most of the people in the class is the explanation of slicing or cutting the pie (which I alluded to back in July). Essentially you use the angles to your advantage when approaching doorways and walls; moving out from the walls as far as possible and moving forward to reveal small “slices” of a room from outside.

Done right, you will always see an adversary before they see you. This is not the forum for a full discussion of these and other tactics and I won’t get into it.

But moving through hallways, entering rooms, discussion of the differences between cover (which stops bullets) and concealment (which does not, but which hides you from sight), and other basic tactics are discussed, and then we go out to Misery City for some practicals.

Misery City, you’ll remember, has hotels, conference centers, restaurants and other stuff, and we’re there now, broken into three groups. One is led by Flanders, one by Spenser and one by a new instructor, from a big-city department. We spend the day happily shouting “PO-lice! Announce yourself or you’re gonna get shot!” and moving into buildings, searching rooms, finding people and generally learning how to search for people and live.

And now we all can enter a room like Tony on NCIS, but correctly.

At lunchtime I drove out to the big cop store about 20 miles away to get fitted for my new uniforms. Damn, that was fun. I’m looking in the mirror and seeing this thing and saying, “Damn! This looks good!”

I’m lucky that my Chief has decent taste; no gay gold stripe down the pants, the uniform is well-tailored and very dark blue – almost black. I’m fitted out in about an hour. 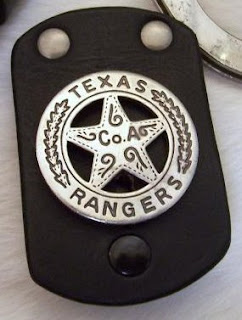 This same day I received in the mail my off-duty badge, which has been carved – in traditional Texan style set by the Texas Rangers in 1836 – from an old Mexican Peso coin. The coins we use, and those now used by the Texas Rangers and the state Fish and Wildlife Police*, are carved from 1847 Peso coins.

They’re small, and require specially made leather badge-holders, but they’re quite beautiful. I won’t put my actual badge here, but I’ve just revealed that I’m in Texas, so Whew! I can stop trying to conceal that, and the example to the left of the Rangers badge is very, very similar to my badge.

I was excited about the uniform and the badge, but I think Welby went a little farther.

“When I tried on my uniform,” he said, “I looked in the mirror and half-popped a boner**.”

Yeah, as I say, I wasn’t that excited.

_______________
* Don’t laugh – Fish and Wildlife are among the most powerful cops in the United States. First, they control hunting licenses and regulations, making them the ultimate authority for most men, to whom hunting is as important as marriage, God and children. Second, Fish and Wildlife are uniquely powered to enter residences and businesses and search for illegally obtained game without a warrant. You can show me your FBI badge all you want, but these guys can walk into your house and open your fridge. I’m not sayin’, but I’m just sayin‘.

My mother and I have discussed quite a bit about why I have wanted, since I was a small boy, to be a cop, and she says that it has to do with authority. That obviously has something to do with it, but as I have discussed here, the authority thing and the gun and the badge, which are of course pretty obviously symbols of this authority, are, while far easier to articulate, secondary in all respects to the true drive to serve. As I explained to my mom, authority is wearing a gun and a badge, but running towards the sound of gunfire, screams and chaos? That’s another thing entirely. And that is what it means to be a cop; those who become cops are those with a passion, a drive, a calling to run towards the gunfire and the screams.

As Lt Col. Dave Grossman (whom I’ve mentioned here and here) has said, the difference between [a cop] and [a citizen] on 9/11 was that the citizen said, “Thank God I wasn’t on those planes,” while the cop says, “Oh God, how I wish I could have been aboard one of those planes.” There was a line in In The Line Of Fire, a 90’s movie with Clint Eastwood as a Secret Service agent on a presidential protection detail, which embodies this. Eastwood’s character is sitting at the Lincoln Memorial and he looks up and says, “Oh, Abe. Wish I could’ve been there for ya, pal.” When I saw this I remember thinking it was as corny as it can get, but God help me I’ve since met many men who have said similar things, and now that I’ve given in to the culture of policing I can say truly that I understand and sympathize with the sentiment.

I’m pretty sure I wouldn’t jump in front of a bullet for a president or other arbitrary protectee, but I can say without hesitation that I would do it to protect my son or wife or family or friends, and state with a pretty good degree of certainty that I would do it to protect even a stranger from deadly force in my presence. It is simply answering a calling – it’s not something I plan to do, but I don’t believe it’s something I’d shrink from, either. I saw how I reacted when the guy socked that woman in Munich (see this post) and took her purse. The reaction was not “Eek!” or “I’ll save you!” but rather it was simultaneously more nuanced and more mind-thwackingly obvious: the thought, the feeling, the impulse that went through my body was one word: “No.” And before I knew it, I’d acted.