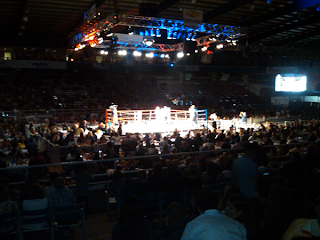 Spent Saturday in the library, and Saturday night headed out to Mesquite, TX, where the annual Guns ‘n’ Hoses charity event was being held.

Guns ‘n’ Hoses is an evening of boxing that pits firefighters against police officers in three-round boxing matches, and the proceeds go to the families of police officers and firemen who die or are injured in the line of duty.

The event was held in a rodeo arena, and was fantastic – a real, old-fashioned night of boxing, with Hooters girls in bikinis holding up the round cards, and escorting in the fighters through smoke and light shows.

The sportsmanship on display was outstanding; at the end of each round, regardless of how tough was the fight, how brutal the match, each boxer hugged the other and shook hands with the opposing corner-crew. Medals were draped round the neck of winner by loser, and loser by winner. It was awesome. 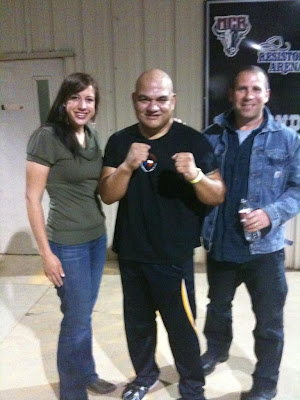 We’d tried to get a whole group of us, but it’s an hour or so away, so only GI Jane and I made it – she got there about half an hour before me, got the tickets and took a seat, only to discover that she was seated on the firefighters’ side of the arena. As she cheered for the cops, people told her, “Go sit on the other side!!”

I arrived just in time to see Ben, a corporal at my agency, have a technically outstanding match with a firefighter, who eventually won on points. Finally our instructor, Joe, got in the ring. In the beginning, he was baiting his opponent, and in the middle of round two started in. Joe, a detective who taught us interrogation techniques, is a phenomenal fighter, and runs a MMA and Brazilian Jiujitsu school on weekends.

Here’s GI Jane, Joe and me back in the fighters’ ready area just after his victory.

I got home around midnight. Oh, and police won the evening, nine matches to seven.